with a cover feature, interview and extensive behind-the-scenes look being published on Pink magazine.

The image is a tribute to Malta’s rich cultural heritage and shows a valuable 16th century knight’s shield as one of the main elements of the composition.

“Apart from showcasing Maltese talent in this industry, one of the objectives of Malta Fashion Week is to promote Malta with a sophisticated international audience, and we need a different and original perspective to stand out.”, explains the chairman, Adrian J. Mizzi, who thought and created the idea for the concept.

Mdina’s main gate was used as the backdrop for the shoot of the first edition and Fort St. Angelo with Valletta in the background was used for the second. This year, a totally different direction has been taken with a studio shot aimed as a tribute to the Knights of Malta. The fact that the image is a graphical composition gives more freedom to the designers to adapt the visuals for the variety of media being used. 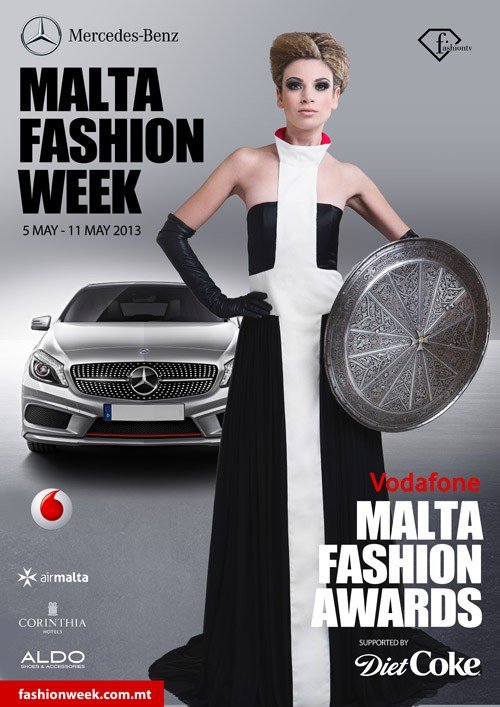 This year’s campaign model is slender brunette Ms. Shana Caruana. She is wearing a long black silk dress with a bold full frontal white cross inspired by a knight’s cape. The dress was designed by prominent Maltese designers Charles & Ron and includes a subtle accent by way of a bright red inside collar. The main prop in the shoot that amplifies the cultural element even further is a precious 16th century knight’s shield that was brought in for the shoot from the Heritage Malta Armoury Collection under strict supervision of the curator. This very precious intricately carved artefact is thought to have been made in Milan for a high ranking knight around 1590.

Prolific Maltese photographer Tonio Lombardi who was commissioned for the shoot, managed to capture the energy of the concept in a very elegant and clean style. Additional design and adaptation is done by the design team at Logix Communications Ltd., the event’s media agency.

The producers would like to thank Heritage Malta for making this concept possible, particularly curator Liam Gauci for his patience that day of the shoot and Russel Muscat for assisting in the co-ordination.

Share
73
This template supports the sidebar's widgets. Add one or use Full Width layout.
X