Big thanks to the team

Thousands of fashionistas descended on the Malta Fairs & Conventions Centre last night for the 15th edition of Malta Fashion Awards sponsored by Vodafone RED and Diet Coke.
The awards went to…

Two additional Awards were handed to Steve Vella and Marisa Grima for their oustanding contribution to fashion. 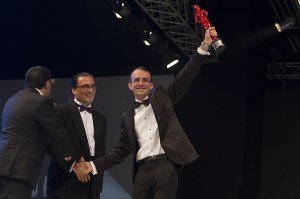 One very special red Award was given to Adrian J. Mizzi himself, in recognition of all the work he has done throughout the past fifteen years to promote Maltese talent in the fashion industry. This Award was planned to a tee without his knowledge by his core team, and was a such a complete surprise to him that it brought tears to his eyes.

After the stage shows were concluded, guests kept partying into the night at the f-vodka afterparty which was supported by Emporio Armani by E-Jewels, with upcoming music producers Vandroo&Luca spinning some of the best dance tunes to everyone’s delight.

Share
49
This template supports the sidebar's widgets. Add one or use Full Width layout.
X