Book your Front Row seat for the Fashion Shows 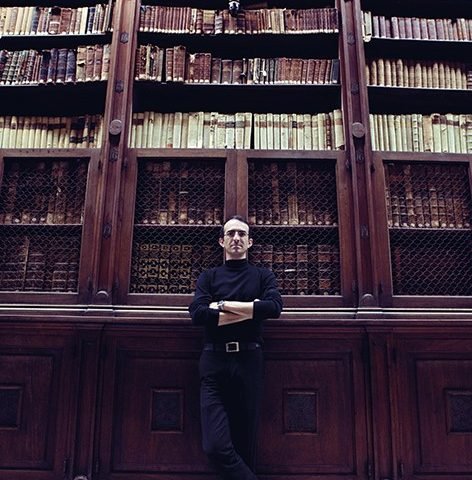 The 2018 marketing campaign was launched in PINK magazine alongside an interview with Founder and executive producer of the Malta Fashion Awards and Fashion Week Malta, Adrian Mizzi – here it is below

And the award goes to… 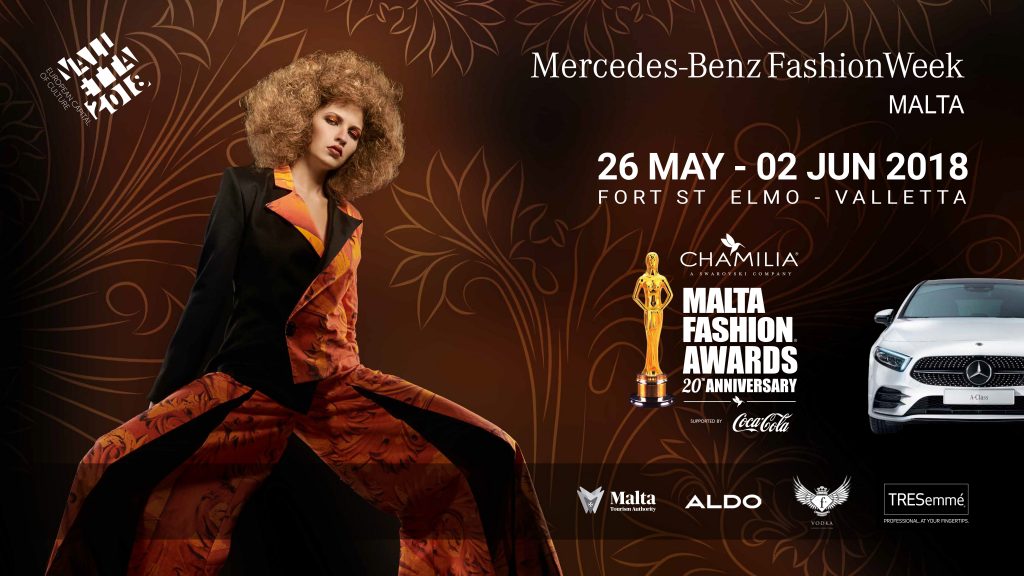 Founder and executive producer of the Malta Fashion Awards and Fashion Week Malta, Adrian Mizzi goes back 20 years to the first competition he organised, where a fashion scene didn’t even exist and doors were shut in his face. Armed with nothing more than a small desk in his bedroom, but big dedication and imagination, he is now celebrating two decades of the awards and would need half the magazine to tell Pink what he plans to do next. Watch this space!

It’s the 20th anniversary of Malta Fashion Awards. When you first started out, did you think you would get so far? And do you see yourself organising
another 20?
My aim was very specific; I wanted to create an event related to the local fashion scene, which would go viral. My target was very clear even though the resources at hand were limited and everyone around me was sceptical about my dream. As regards seeing myself organising another 20, well, when I was 24, it was easier to forecast 20 years ahead. At 44, it is more difficult.

Compare and contrast the first Malta Fashion Awards with the upcoming
one.
I organised the first event at the New Dolmen Hotel, using bits and pieces from the remains of carnival floats and the Malta Song Festival stage. There was almost nothing to showcase related to local fashion as, in reality, there was no fashion at that time. I wanted to create this event so that all those who were eager to one day stand behind that podium and hold an award would follow my guidelines for better results. This was the main aim of the fashion awards – to create an event where those who wanted to take part had strict guidelines to follow, created to improve the local fashion industry. 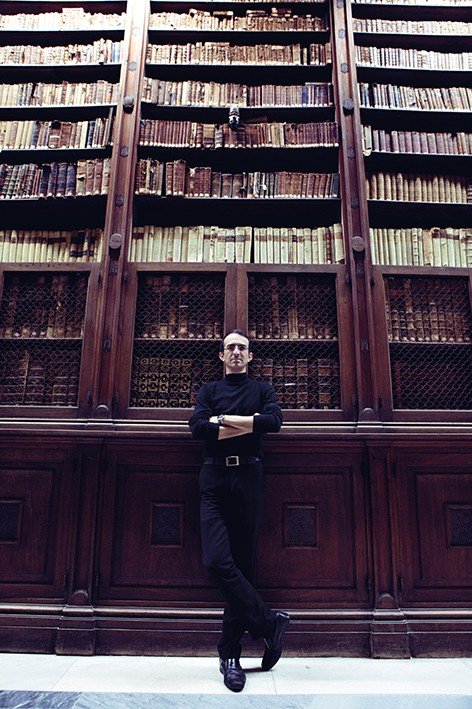 What makes you cringe about the early days? A lot of things: no finances, no talent to create the event with and the so-called big shots of the time trying to ‘eradicate’ me from the scene. I had literally nothing; just a small desk in my bedroom and a lot of dedication and imagination, although I cannot fail to mention a small core of good friends, and a very supportive girlfriend, who were always there for me.

And what would you never have done in hindsight?I think that what I did at that time was the best for that time. Today, I see it from a completely different viewpoint because many years have passed. However, considering that time, I took the best decisions every time.

You have watched Malta’s fashion industry grow from practically nothing over the last 20 years. In what way has it developed and how much has
Malta Fashion Week & Awards helped? At that time, there was no Internet, and no digital photo­graphy, so I couldn’t know what fashion was in other countries except what I read in the very few imported magazines. So, I contacted all the people who, at that time, were considered fashion related, from photographers to hair­stylists and make-up artists. From the photographers, I collected all the best fashion photos they had, and for hair and make-up artists, I used to go from salon to salon, waiting for them to create the best style, while we used to set up a small studio to take photos of the final result. Then I managed to set up meetings with some top experts in Milan by means of hand-written letters and phone calls [no e-mail at that time] and I got an appointment with all of them in the same week. I still remember flying to Milan with three suitcases full of physical photos. Among those who offered their assistance were The John Kaverdash Institute of Fashion Photography and Aldo Coppola. I was going to faint when I got their feedback. I still remember clearly some harsh words: “In Malta, you do not have any idea of what fashion is. For example, the only way this photo­grapher can earn money from the camera is to sell it and buy food with the money he gets”; “Forget about these people; they are now old, and you will never manage to convince them that they are not fashion material… Invest in the next generation.

They will try to destroy you for this. You will reach your target depending on how strong your will is to succeed.” At that time, I was just 24, and I was not ready for such comments. But I came back to Malta with a mission.

What do you think was the most important element you ever introduced that took the event to another level? Almost every year, there was something new, which helped the event to go to the next level. I still remember going to the Mediterranean Conference Centre [it was my dream to organise the Fashion Awards there] and the person I met looked at me and said: “I will show you around only to show you the place, but you will not be entitled to organise whatever it is you are doing. Only the big events are given permission to be organised here. Not to mention the budget, which is something you can only dream of having.”

What would you say about fashion models, photographers and designers in
Malta today? Since this relates to three different sectors I will give three different answers. As regards photography, there is still a lot of room for improvement. Fashion designers need to learn how to become more commercial. And as for models, we are very limited in numbers, mainly due to height requirements. They should all consider going abroad to take in-depth courses and learn the tricks of the trade; otherwise, it will take them a lifetime to get close to what they can be. Also, fashion is art and some need to accept the reality that this may not be their main line, even though it’s the love of their life. Do they really have a future in Malta, and can the island be a stepping stone to the international scene?

Definitely! However, it takes more than just talent. A good fashion designer also needs to be an entrepreneur. You cannot excel in designing, sewing, selling, meetings, contracts, marketing etc… etc… They need to have a proper team surrounding them, and if employment is not a possibility, they need to consider
partnerships. In come the bloggers… How quickly did you embrace them and how did they change the dynamics?

The blogging industry was amplified in a way by Malta Fashion Week. There were some people who were not yet bloggers, but interested in fashion; we invited these over, seated them in the front row and encouraged them to write and grow. This helped people onto the path of creating their own blogging platforms. Some have been quite successful; others not as much; others perhaps have an inflated view of themselves.

What are the obstacles you continue to face, apart from the fact that MFW can never be like the fashion capitals of the world? Lack of budgets is the main issue, and the reason why we can never be like the big ones! Today, in 2018, I can guarantee that if proper budgets were allocated to Malta Fashion Week &; Awards, in a span of nine years, Malta would become a hotspot for fashion shows, on a par with the big ones, and would be self-sustained. Moreover, Malta Fashion Week can bring over different types of investment, different type of tourists and offer a different exposure for the Maltese Islands. But with budgets that don’t even cover the cost of the lighting equipment, we will never get close to this. The budgets I am referring to are nothing other events have not already been given over the years. I have all the necessary contacts in the international scene, together with their respect [which is of utmost importance]. All I need is the budget, and I will do it.

The street style that slips out of the international fashion weeks is almost taking over the catwalks themselves. Is this unlikely to ever be the case here? They are like two different types of drinks, which when combined together, form a wonderful cocktail. There cannot be one without the other.

What can we expect that is new and exciting on the local scene at the next MFW? I suggest that you attend and see for yourself, but with more than 30 different events in just one week, we will definitely offer a great experience to all those who come. Apart from the local fashion designers, which are growing from year to year, we will also have designers from France, Serbia, Romania, Spain, Australia and even Argentina.

And where would you like to take this event in the future?
To answer this question properly, you would need to allocate half the magazine. 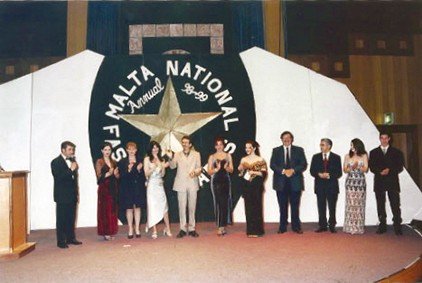 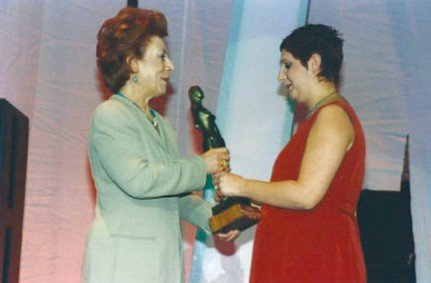