Today’s edition of Pink Magazine published with the Sunday Times of Malta, reveals for the very first time, the campaign image of Mercedes-Benz Fashion Week Malta 2015 on its cover. 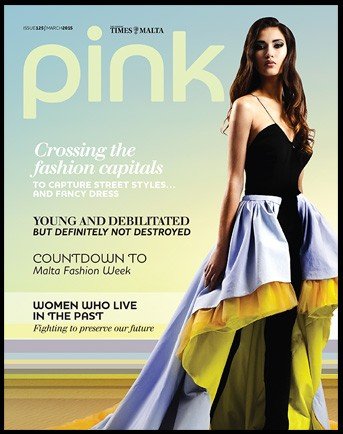 The photo features the young Maltese model Amy wearing an outstanding dress created specifically for this shoot by fashion designer Caroline Hili. The two part outfit, inspired by the liberation of woman, consists of a sky-blue heavy silk skirt worn over a midnight-black tailored pant suit.

The fifth edition of Malta Fashion Week runs from the 9th to the 16th of May and will take place mainly in the capital city Valletta. Whilst details of the calendar of events are still being finalised, we can reveal that no less than fourteen new Maltese fashion designers will be showcasing their work for the first time this year. This strongly reinforces the very reason why Malta Fashion Week exists, namely that of promoting fashion “made in Malta”. Apart from these there will be several fashion shows throughout the week from another ten Maltese and ten international designers from the USA, UK, France, Italy, Serbia, Nigeria and Cyprus. Some of these are arriving in full force with crews of more than twenty people including models and other professionals. The week also features satellite events including exhibitions of fashion photography and jewellery.

As in previous years, Malta Fashion Week is being supported by FTV – the world’s biggest fashion TV channel reaching over 500 million households in 193 countries worldwide. Moreover, with more than sixty journalists, bloggers and photographers already registered for media passes, coverage from fashion media is expected to be as substantial as in previous years.

The week-long celebration of Maltese and international fashion culminates at the 17th edition of Malta Fashion Awards. Anticipation is already very high for this prestigious event that is once again being held at a totally new and so far, top secret venue outside Valletta.

Mr. Adrian J. Mizzi, Executive Producer of Malta Fashion Week, thanked V18 Foundation, Valletta Local Council, Grand Harbour Regeneration Corp, Heritage Malta and the Malta Tourism Authority for their support in making various unique venues available for use during the week. “This element of promoting Maltese history and culture is highly appreciated by foreign visitors and adds an interesting dimension that is not found in similar fashion weeks elsewhere”, he continued.

Last year more than 10,000 people attended Mercedes-Benz Fashion Week Malta events, which are all free of charge by invitation, except for the final night. None of this would be possible without the support of numerous sponsors. Please visit www.maltafashionweek.com or facebook.com/maltafashion for more information.

Fashion designer Caroline Hili created a unique show piece outfit for the MFWA2015 campaign. Here is what she had to say about her concept, materials used and her experience in working with Amy:

I don’t usually like explaining what a dress represents to me, I prefer to create an emotion in the viewer, whether it’s awe or disgust, it’s not an issue to me. They say we’re all different and beauty is in the eye of the beholder. For me this dress’s concept was the liberation of the woman, so I decided to give her a set of wings as immense, beautiful and comforting as the sky in its most striking state reflecting a delicate yet powerful sunrise.

Materials used were oxygen, energy, light, passion, love and patience, the same ingredients used by my mother to create me.  It is a two piece outfit consisting of a ‘midnight black tailored pant suit’ and a ‘sky-blue heavy silk skirt’ which unzips easily, liberating the delicate fragile looking, yet strong female figure.

The model – Amy Zahra, embodied the star in my imaginary sky, completing the composition magnificently and though having a petite frame and a young age, she owned the look completely. The final image reflected a woman full of confidence with fire in her heart and ready to conquer!

Share
98
This template supports the sidebar's widgets. Add one or use Full Width layout.
X